Driving through the Blue Mountains

via the B1 Road

This route, from Papine to Buff Bay via the Blue Mountains and John Crow Mountains, is arguably the most scenic drive on the island. It takes you through the highest mountain ranges in Jamaica with glimpses of mountains, waterfalls, flourishing rainforests and coffee plantations. This National Park was inscribed on the list of UNESCO World Heritage Sites in 2015, for its rich natural and cultural heritage.

It is highly recommended for visitors as well as locals as it is still yet relatively undiscovered by many Jamaicans. Everyone should do the complete journey at least once as it captures the beauty and essence of the mountains of Jamaica.

The journey takes about 2 1/2 hrs non-stop, but allow 3-4 hours for a leisurely drive with stops to enjoy the sights, landmarks and attractions along the way.

A 4-wheel drive car is not a requirement. A regular car should do it. The road is narrow in most places, so slow down and take your time. The road is in general, is in reasonable condition but there are spots where there are deep ruts and pot holes from heavy rains. Portand is known for heavy rains, making the road susceptible to landslides and potholes caused from heavy water flow.

The route was very unpredictable in previous years with long periods of closure because of landslides. You could never know with confidence if it was open all the way through to Buff Bay. Things have been better in recent years and the route has been more stable. But, it is still a good idea to stop in Irish Town or Newcastle and ask someone if it they know if it is open. The worst case is you'll have to turn back, but the drive itself will be worth it.

Route Elevation - Papine to Buff Bay via the Blue Mountains

The B1 - Papine to Buff Bay

The journey starts in Papine, a bustling market square in Kingston/St Andrew, close to the University of the West Indies. Within 2 mins drive on the B1 (Gordon Town road), the bustle of Kingston is left behind and the road quickly winds an ascent northward, hugging the banks of the Hope River, into the mountains. About 2 miles from Papine, the road crosses over the river (now running on the left), and just beyond this point, the road branches at a small hamlet called the Cooperage. At this junction, the B1 turns left and the Gordon Town Road continues to the right on through Gordon Town all the way to Mavis Bank, the heart of Blue Mountains coffee region and the main access point for the Blue Mountains Peak.

Turn left at the junction at the Cooperage and follow signs to Newcastle. The precipitous climb into the mountain begins here as the the winding B1 road north travels north towards Irish Town, a small village where the coopers lived during the 19th century.

The Cooperage and Irish Town

The Cooperage takes its name from from the Irish coopers who lived in Irish town, and and worked here in the 19th century. A cooper is a person trained to make wooden barrels and other containers from timber made pliable by applying heat or steam. Cooperage is the name given to the process. These coopers who came from Ireland and they made the wooden barrels used for the export of rum and coffee. Potatoes are still an important crop in the area, reflecting the Irish influence.

Today, Irish Town is most known for the exclusive resort of Strawberry Hill, well known in the music industry. Artists such as U2, Rolling Stones, Stevie Wonder and Sting have stayed here. It is where Bob Marley convalesced after being shot in 1976. The property overlooks Kingston with expansive views all way to the ocean. Stopping here for a meal, drink or coffee before continuing the journey is recommended. The grounds and buidings featuring a distinctive creole feel are beautiful. 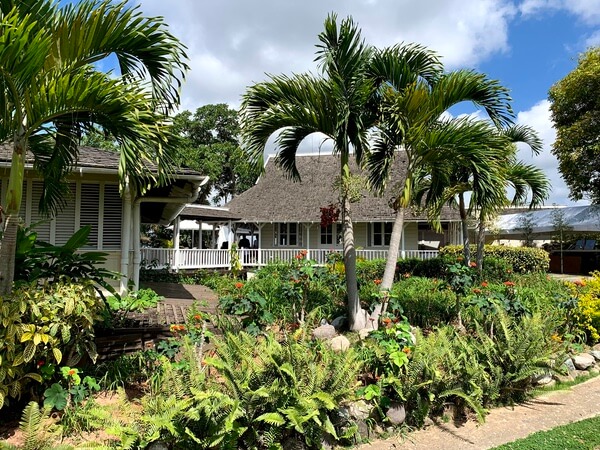 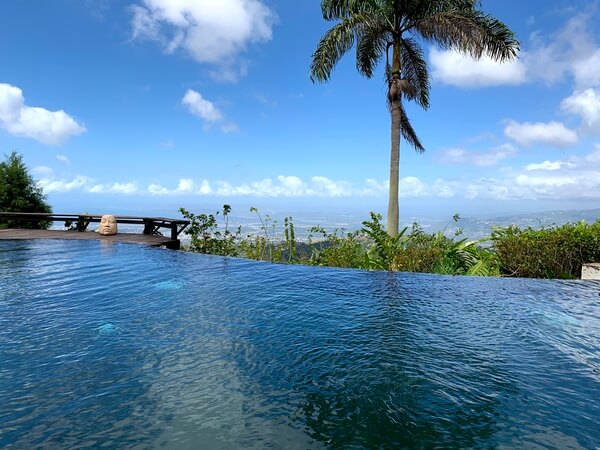 A few minutes drive beyond Strawberry Hill, is the community of Redlight, named for the bothels that kept the Irish coopers entertained during the 19th century. There are many hiking trails in the area, passing through coffee plantations and small waterfalls. There are a few rum shops and areas with beautiful views overlooking the Liguanea plains.

From Redlight, the road negotiates several hair-pin turns as it climbs to Newcastle. Sitting at 3,500ft, about 5.5 miles from Irish Town and 1,000ft higher, Newcastle offers some of the best views over Kingston and beyond. On the opposite side of these views, Catherine's Peak towers above the camp. Often shrouded in mist, it is named after Lady Catherine Long, wife of Sir Henry Moore, who served as the governor of Jamaica and of New York in the 18th century. Lady Catherine is reputed to be the first woman to climb the peak in 1760. The peak is a local landmark, easily spotted by its radio mast perched top. The peak also lends its name to the spring-water that is bottled in the area.

Newcastle was established as a military mountain station for British soldiers in Jamaica by the governor, Major General, Sir William Maynard Gomm, in 1841. Today it is a training center for the Jamaica Defence Force. The road passes through the parade ground, where soldiers in training are often seen doing chores or going through training exercises. The buildings of the camp are located on terraces cut into the mountain side. 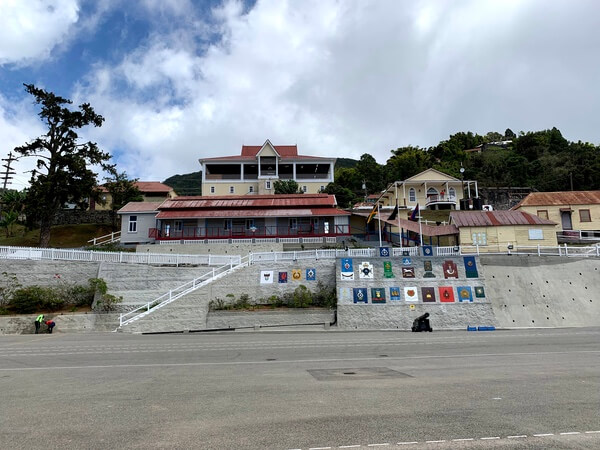 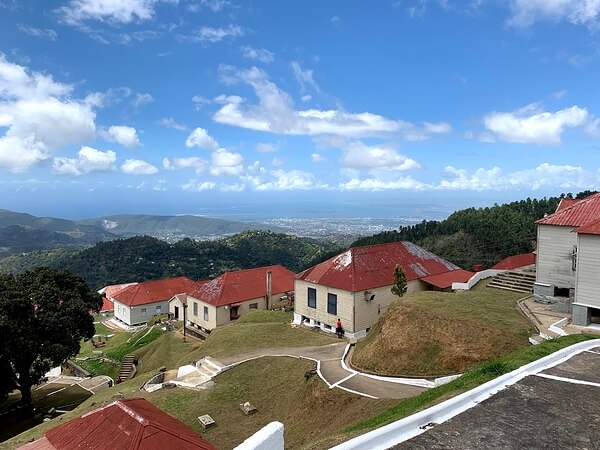 From Newcastle the road meanders between St Andrew and Portland parishes finally decisively entering Portland just before Hardwar Gap, a hamlet named after a British army captain who was responsible for the road from here to Buff bay. A small mountain-side cafe and restaurant called the Gap Cafe, is the only notable structure in the area. It was built as a way station for carrages and travellers on horseback in the 1930s. Just beyond the Gap Cafe, is Holywell National Recreation Park, a 300-acre park that is often shrouded in mist, part of the greater Blue and John Crow Mountains National Park. 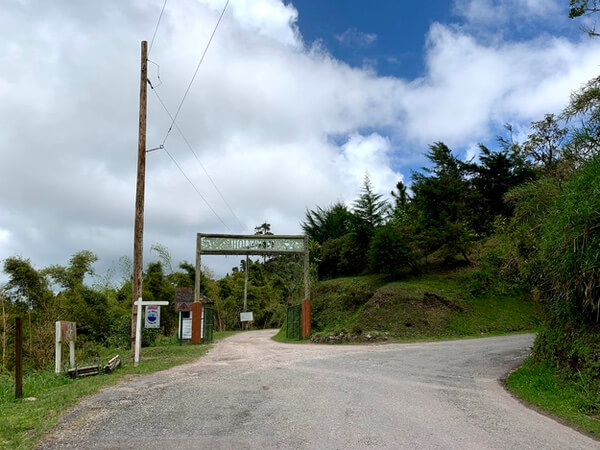 Holywell Entrance to the left, B1 continues right 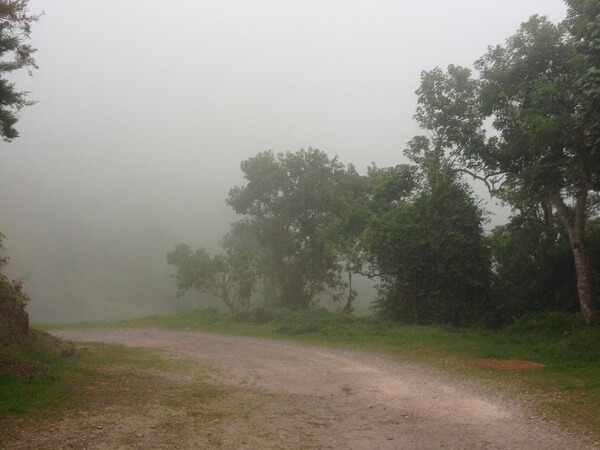 Several endemic plants and bird species can be seen in the park. Endemic birds such as the streamertail hummingbirds — known locally as doctor birds — and the Jamaican tody, the Jamaican blackbird, and the yellow-billed parrot [...more on birds endemic to jamaica]. Many migratory birds from northern regions winter here.

The park has camping facilities as well as cabins equipped with bathroom facilities, kitchenettes, hot water and WIFI (For cabin bookings call: 1 (876) 960-2848-9 or 1 (876) 920-8278-9). There are trails through the forest ranging from easy to moderate. The Oatley Mountain Trail a 3/4 mile long moderately difficult walk, traverses through forests rich in ferns and mosses with views of St. Andrew and Portland from three look out points. Another, of similar length and difficulty leads to a 15ft cascading waterfall that plummets into a shallow pool just big enough for a quick dip in the cool water. 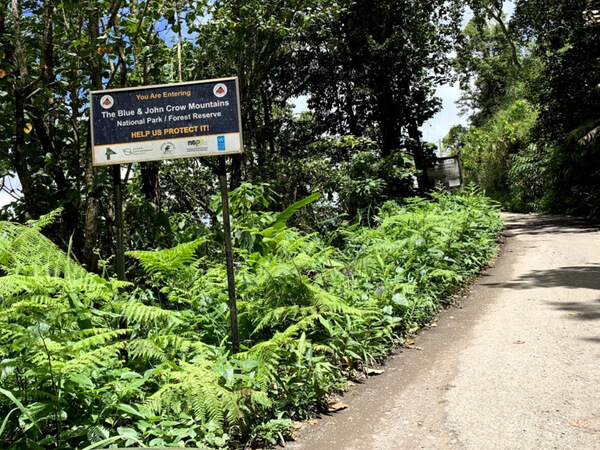 Holywell is typically the furthest most people go along the B1 from Kingston. Beyond here the road travels through the Blue and John Crow Mountains National Park, a UNESCO heritage site, on its way to the north coast of the Island. The route is sparsely populated and can be prone to landslides in the rainy season making the conditions unpredictable.

Beyond Holywell, the road becomes very rough with large potholes for a few miles. About 3 miles further on, it improves before entering a a small settlement in the heart of the coffee-growing district, called Section. The locals will often approach your car selling the local coffee. The main B1 road through this area was washed away during a hurricane several years ago. It was never replaced, but a new paved path through a private farm was created to link the parts of the B1 that was severed by the landslide.

There is a coffee farm owned by the Tyman family, called the Old Tavern Coffee Estate just before entering the hamlet of Section. It is now run by Dorothy and her son. Tours of the estate can be arranged by appointment.

From Section, you enter the Blue and John Crow Mountains National Park, 101,313 acres of forestry covering the highest and steepest terrain in Jamaica. The views are breathtaking.

Another three miles on, the Blue Mountains Bicycle Tours restaturant will be on your right. It is located on a major switchback in the road. The road doubles back on itself making a sharp 180 degree turn just beyond the building as it continues down the mountain below the back of the building. The building is perched precipitously on the steep mountainside, with the front entrance level with the upper portion of road and the back overlooking the road below and the mountains in the distance. 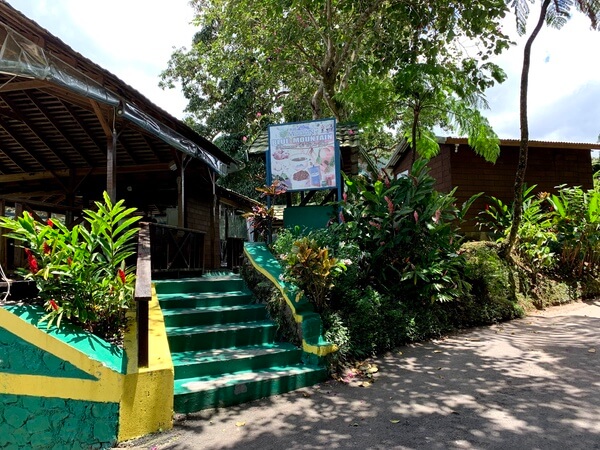 The Restaurant overlooks the mountains and the road below

Five miles further on in the hamlet of Muelleth Hall and hidden in the forest of the Blue Mountains, is the Fish Dunn Falls, also known as Fish Done Falls or Fishdone Falls. Why three names? Well, welcome to Jamaica... having different spelling for a location is not unusual. We chose the Fish Dunn spelling because that is what you will see on Google maps.

The locals explain that the fall got its name from the fact that the base of the fall is the furthest upstream you'll find fish with scale. It is a plausible explanation, but who knows if its true. What we do agree with though, is that this lesser known waterfall located on a secluded coffee farm, is worth the visit. The pool at the base of the fall is large enough for swimming and the falls are beautiful. To get to the falls, look for a sign for the Avocat Primary School and turn left just before the white Silver Hill bridge. 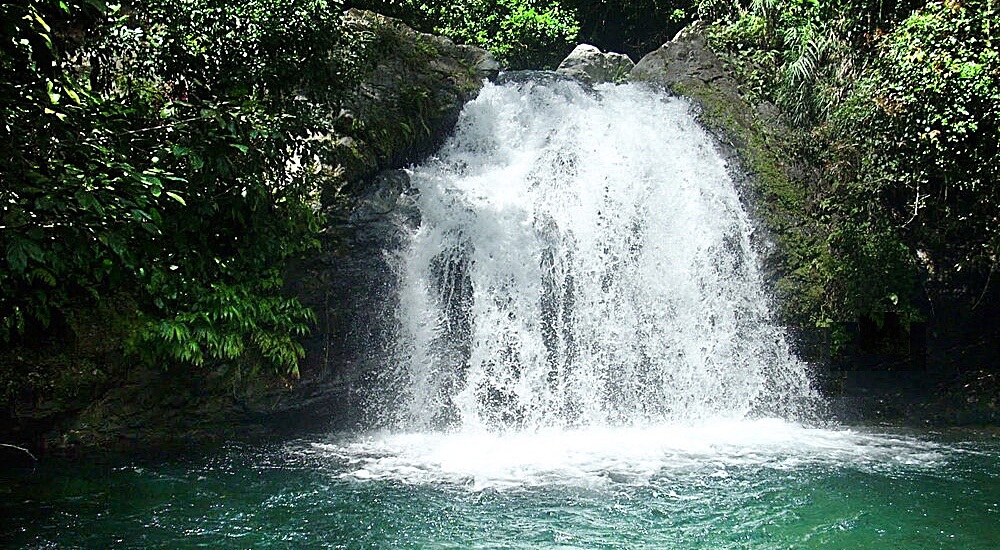 The remaining 8.5 miles to Buff Bay is scenic as you pass through hills and valleys, forests and breathtaking foliage. At the right time of year, this part of the mountains is extremely beautiful when the Flame of the Forest trees are in bloom. In Jamaica, these trees are called Donkey Pee Pee trees, named from the liquid that squirts from the flower buds when squeezed. When in season, like a beautiful painting on a canvas, the large red flowers can be seen near and far, creating a canvas of bright red sprinkled against a backdrop of a green landscape as far as the eyes can see.

The last stretch into Buff Bay goes through towns with a lot more people on the streets and with the traffic getting denser as you approach the seaside town of Buff Bay.

Your reward at the end of your journey, the shores of Buff Bay

The end of the Journey

There are a couple options once you get to Buff Bay. You can head back to Kingston, via the A3, to the west of Buff Bay. The drive back is about 1 1/2 hours. Or, head east about 45 minutes to Port Antonio and spend the night.

Port Antonio is one of the most beautiful parts of Jamaica where the foothills of the Blue Mountain range kisses the Caribbean sea. 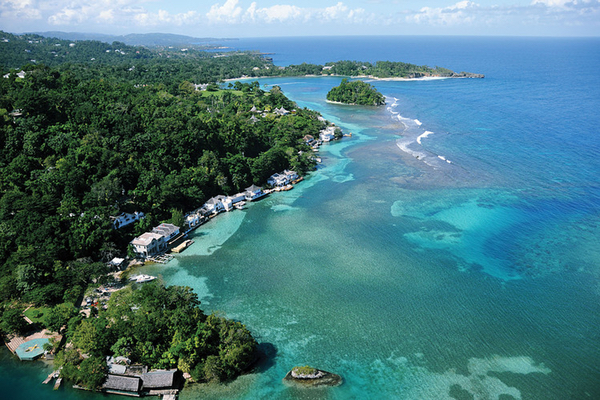 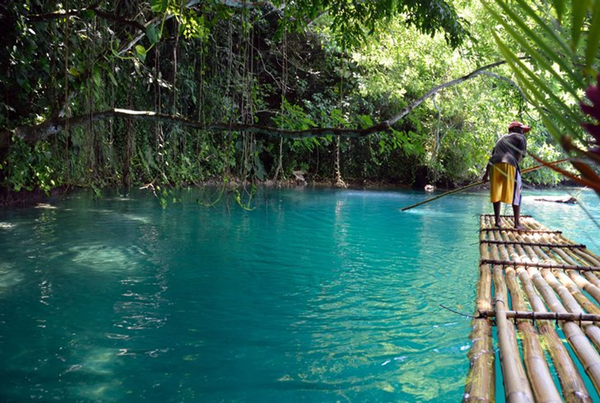 Driving through the Blue Mountains via the B1